What do the dots mean in a squash ball

Ever come across the different color dots on a squash ball? Apparently, every dot and color has significance, read this blog by The Squash Company to know more.

Squash balls for senior players come in six varieties, each with different levels of ‘bounce’. The level of bounce is denoted by colored dots on the ball. For younger players, there are a number of ‘Mini-Squash’ balls available which have a very high, prolonged bounce.

The standard ball for professional competitions is the double yellow according to the World Squash Federation. This has been the case since 2001. The bounce of a squash ball also varies as a function of temperature, which is why it is recommended that a squash ball is warmed up before use.

How to choose a squash ball

The four most common kinds of squash balls are red, blue, single yellow, and double yellow. When starting out blue or red balls are best These allow for players who are still developing their hand-eye coordination to learn techniques without slow reaction times halting progress. Some manufacturers also offer slightly larger balls for new players. 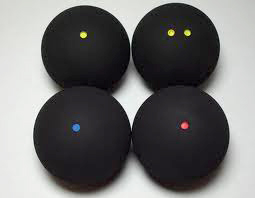 Unless you are a good player it is best to play with a blue or red ball while you improve, as more advanced balls require long rallies and regular hard-hitting in order to stay sufficiently warm.

As you get better at squash you can move on to single yellow dot balls, but don’t be tempted to move to double yellow balls immediately. Playing with a more difficult ball prematurely can hinder your performance. Hitting a boast shot, for instance, is easier with a single dot ball as the ball sits up a bit higher. Double yellow squash balls are typically used by advanced players.

If you are playing against someone who is at a lower level than you, play with a ball that is appropriate for his/her skill level.

The temperature of the court should also be taken into account, as some courts are colder than others and you will therefore find it easier to play with bouncier balls. In the winter on colder courts, we frequently use single dot balls even for advanced players, as the double dot balls simply don’t bounce enough. It often simply makes for a far more enjoyable game to avoid the double dot.

The following blog has been authored by The Squash Company

561 views
1 clap 0 comments
Clap
Comment
Report
We have saved your concern. Thanks for writing to us.

Are you sure you want to delete this comment

Accepted photo formats include .jpg .jpeg .gif and .png
File size should be less than 15MB.

Your file was successfully uploaded.

You can view the file on Homepage and profile section

We have saved your concern. Thanks for writing to us.
Previous Next